ON MONEY, WEALTH AND POVERTY

Literally: These things.
A phrase that means "money".
This originates in the following story:
During the Jin dynasty (265-420 CE) there was a man named Yan Wang  , who considered himself elevated above considerations of material interest and refrained from uttering the word "money".  His wife did not, understandably, accept his approach, and one day when Wang Yan was sleeping she sent the servants to fill his bed with piles of money. She thought that when he would wake up he would have no choice but to say the word "money". Wang, however, although seeing the money around him when he woke up, was still determined not to utter the word. Instead, he called out, "Take these things from here!" 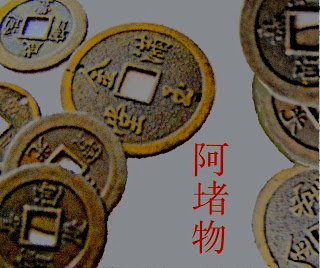 A poor man, [though] he lives in a noisy city – nobody is interested in him, [whereas] a rich man who lives in a desolate mountain area - [even] distant relatives visit him
*

Literally: The sun is rising and setting [and] the moon is waxing and waning.
Wealth, like poverty is in not permanent. Economic conditions may change throughout life.
In the Bible it is written:
לא לעולם חוסן (משלי כז 24)
For riches do not last forever (Proverbs, 27, 24)
*

He who lacks a strong will, will be poor for a lifetime
*

One coin of money [can] conceal a hundred [spots of] ugliness
*

Beggars appear in the dragon lantern parade - poor people's joy
The same idea is found in the idiom:

He who wants to become rich must take risks
*

A poor person - his relatives[1] cut themselves off from him
*

He who reaches the front door to which a tall horse is tied up - [though] he is not a relative [of the people in the house], he will consider himself a relative
A rich person or he who has high position, attracts people who expect to benefit from him.
*

Money is not omnipotent
This, as opposed to the much-used idiom in English:
Money makes the world go round
*

Land of fish and rice
A land of plenty.
In the Bible it is written (21 times):
ארץ זבת חלב ודבש
Literally: Land of milk and honey.
*

Literally: Reads "The Hundred [Chinese] Family Names"[3] without reading the first character
Said of those who speak about money before anything else.
The first name in the list of the Chinese family names is Zhao , and the second is Qian , which means "money".
*

Literally: [When] there is water in the big rivers, the small rivers are filled.
When the community prospers, the individual prospers too.
The same idea is found in the idiom:

Literally: [When] there is no water in the big rivers, the small rivers dry up.
When there is a shortage in the community, the individual is poor.
*

Walking dressed up in an embroidered robe at night
Said of a person who cannot reveal his wealth and high position to the public.
This is based on the following story:
Xiang Yu [4], who led his army to the occupation of Xianyang , killed the surrendering King of the State of Qin , burnt the palaces of Qin, and began withdrawing eastward with the looted treasures and captured women. One of his advisers advised him to stay in the region of the city of   , saying, "Guanzhong is protected from all sides by mountains and rivers, and its earth is fertile. Establish your capital city here, and then you will be able to rule the entire state".
Xiang Yu saw the ruined palaces of the State of and missed his home. Then he said, "Not returning home after becoming rich and gaining high position, is like walking dressed up in an embroidered robe at night. Who will notice that you are rich?"  Therefore, he was determined to return to the east. 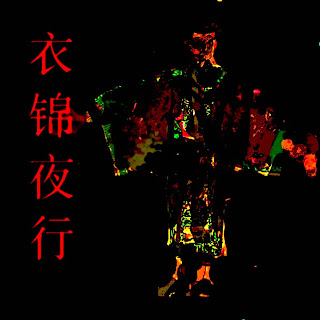 [1] , literally: six kinds of family relatives: father, mother, big brothers, small brothers, wife and children.
[2] On the meaning of the term "face" in Chinese, see the chapter on face and on losing face.
[3] "The Hundred Family Names" is the title of a text written by an anonymous writer from the period of the Song  dynasty (960-1279 CE), which sets out the Chinese family names. See also the chapter on family.
[4] Xiang Yu (232-202 BCE ) was a prominent general during the fall of the Qin dynasty.

[1] See also the chapter on symbols in the Chinese culture.

Posted by Hila Berliner at 6:49 AM

Labels: ON MONEY WEALTH AND POVERTY